Reading Sheet Music: An Introduction To Notes, And Note Names

Now that we have learned about the score and about clefs, we can begin to discuss the actual notes themselves.

When you look at a piece of sheet music for the first time, it can seem incredibly overwhelming, almost even intimidating. Believe it or not, there are only 7 main notes that we need to worry about, and these are named after the first 7 letters of the English alphabet. They are:

That’s it. There are some additional notes between some of these (called sharps or flats) that we’ll get into later, but for now, let’s just focus on these 7.

(Note: Many countries in Europe use something called the Solfege system, and instead calls the notes La (A), Ti (B), Do (C), Re (D), Mi (E), Fa (F), and So (G) instead. If you are from Europe and are used to this system, hopefully it will be easy to translate these to the letters.)

The Order Of Notes

Hold on. There are more than 7 notes in music, right?

This may sound a little bit confusing, but each note has multiple ‘versions’ of itself at different pitches. For example, listen to the audio clip below:

This audio clip included several different notes, but each one of them were all ‘A’.

We’ll get more into how this works in the next lesson. What’s most important right now is that you understand the order of the notes.

Here is an ascending scale, starting with the note ‘C’.

Pay special attention to the G note within the scale.

If you’re going up, the next note after G isn’t ‘H’, which is what many people would naturally think! Instead, it starts over at ‘A’ again.

Likewise, if you were going down, starting with the note C, it would be…

This can also be illustrated with this circle: 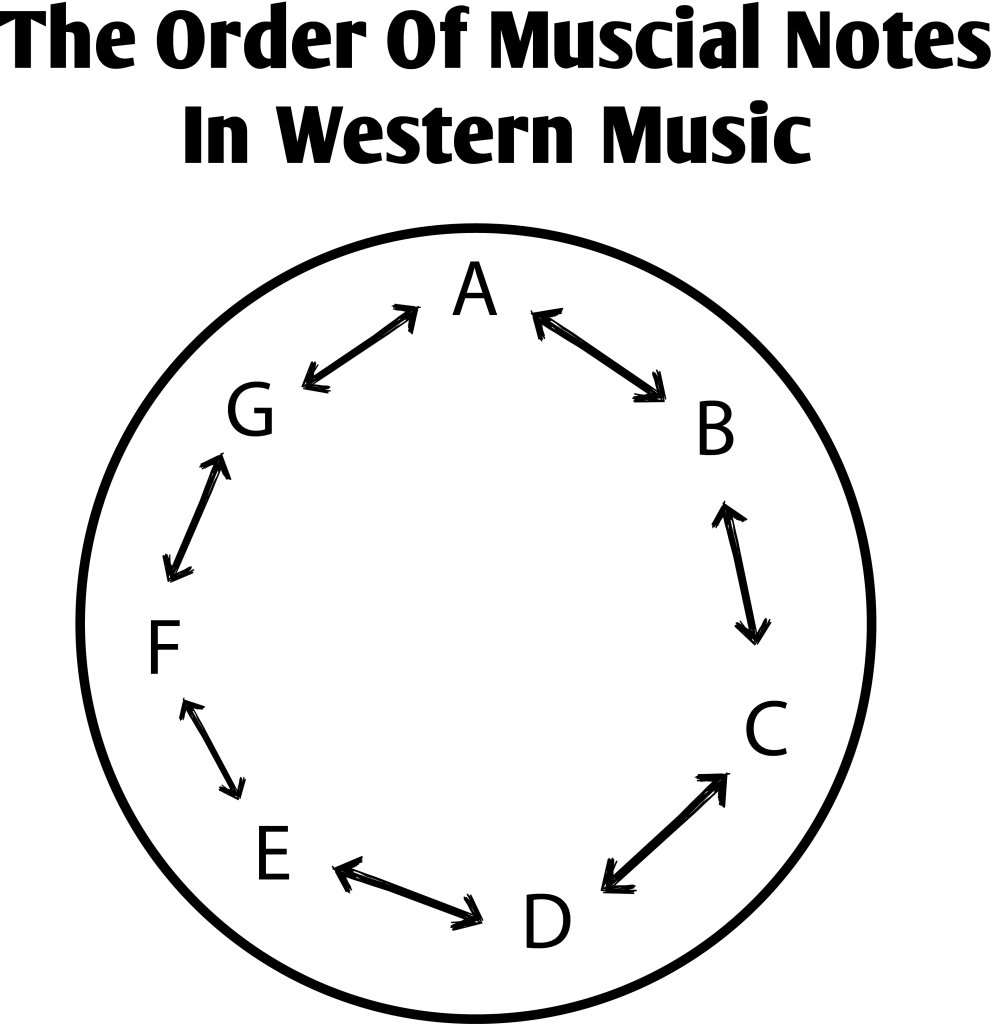 Position Of The Notes On The Staff

Now that we know the names of the notes, and the order in which they appear, let’s talk about which note is which on the staff. If you viewed our lecture about clefs, you’ll remember that notes will be different depending on which clef you’re using. For this example, we’ll be looking at notes with the treble clef, since the treble clef is the most common clef in music.

As illustrated on the scale above, the notes go up little by little on the staff, alternating between the ‘lines’ and the ‘spaces’. 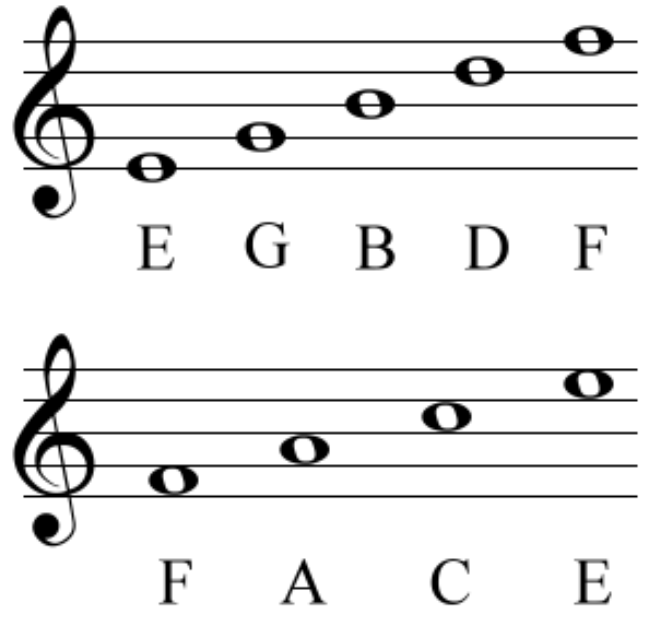 Therefore, you can find out which note you’re looking at by doing one of the two things:

For example, looking at the graphic above, we know that the first ‘space’ is the note F. Therefore, we know the line above it is ‘G’ (since G comes after F) and the line below it is E, (since E comes before F.)

Simply by counting up or down, you can always identify the note you’re looking at this way.

However, it may not be the most efficient method, which is why memorizing each of them can help you read music more quickly. Especially since some notes go above or below the staff!

How To Memorize The Notes On The Staff

In my experience working with students, the easiest way to memorize the notes on the staff are to use acronyms.

The spaces are easy! From bottom to the top, it simply spells the word ‘face’. If you’re ever stuck with notes on a line, you can always just look for the letter between the spaces. For example, if you know that the third and fourth spaces are ‘C’ and ‘E’, you also know that the line in between them makes the note ‘D’.

The lines are a little bit more tricky, because they make up the notes E, G, B, D, and F, from bottom to top.

This doesn’t spell anything, but this is where an acronym can help. The most popular one, going from the bottom line to the top one is:

Some other popular ones include ‘Every good boy does fine’, and ‘Empty garbage before dad flips.’ Feel free to make up your own – whatever helps you remember the best!

Notes Going Off Of The Staff

As mentioned earlier in this lesson, notes are not restricted to only being on the staff. In fact, if they were, music would be very limiting!

Just like you can count up or down to find the names of the notes on the staff, you can continue to do this as the notes move off of the staff as well.

See all of those extra lines? These are called ledger lines, and are added to help musicians determine what note to play. Some of the notes have a ledger line through them, while others are on a ‘space’ above the line.

Unfortunately, memorizing them can get a little tricky.

It helps to remember that the acronyms we learned about earlier, repeat themselves over and over again. For example, although the first ‘F’ note on the staff is in a space, it also repeats itself on the top line of the staff.

The same applies with the other acronym, EGBDF. With notes on the staff, the highest ‘E’ is now inside of a space. Therefore, the next ‘space’ note would be G, which rests in the first space above the staff. The next one would be B, then D, then F, because the pattern repeats.

Don’t worry if this seems confusing right now, as you probably won’t be playing music too far off of the staff to begin with. Just know that the notes do go off of the staff, and there are tricks you can use to help read the notes more quickly.

Learning which note is which can be tricky, and you shouldn’t feel discouraged if it takes you a long time to learn the correct name of each note.

Practice identifying notes within simple sheet music, even if it means counting up and down, note-by-note until you get them. This skill will improve in time, and eventually it will become second nature, I promise you.

Remember after all, there was a point in your life where you probably had to sound out words in order to read them.

To end this lesson, let’s review some of the new terminology we’ve covered:

Scale: A sequence of notes going up or down.

Ascending scale: A scale that is going up.

Descending scale: A scale that is going down.

Ledger lines: Short lines used for notes above or below the staff. These help you determine which note to play.

In the next lesson, we’ll learn more about how pitch works, and why we have multiple notes that share the same name.

Click here to view the next lecture: An Introduction To Pitch, Pitch Classes, And Octaves