How To Use Noire’s Particle Engine With Other Instruments

One of my favorite piano libraries is Native Instrument’s Noire.

Sampled from a 9′ Yamaha CFX concert grand, this piano library is incredibly powerful, tweakable, and suitable for a large variety of music. It’s no wonder why it’s quickly become such a huge hit among pianists!

However, one of the most unique features about Noire is its particles engine. The particles engine is a note generating algorithm that adds extra notes and harmonic content based on what you play within Noire. If you listen closely, you can hear an example in this video:

(It’s funny – since Noire was released, I occasionally hear the particles engine used in production tracks and can tell the artist is using Noire!)

Routing The Particles Engine To A Separate MIDI Track

Wouldn’t it be wonderful if you could use the particles engine with other instruments, other than just the built-in samples within Noire?

It turns out that this is not only possible, but it’s quite easy as well. Pretty neat, since not a lot of people know about this! In fact, this function can also be used for other creative effects, like exporting the notes generated by arpeggiators in other libraries.

Anyway, let’s look over the steps to exporting Noire’s particle engine notes. For this tutorial, I will be using Studio One as my DAW. I have also confirmed this working with Cubase, Reaper and Ableton, but it should work on other DAWs too. Logic may have issues as AU plugins do not send MIDI out, however.

To make things easier, you’ll want to load up Noire in Kontakt rather than with the Komplete Kontrol software. This tutorial will also work whether you use Noire Felt or Noire Pure.

Once you open an instance of Noire in Kontakt, click the little gear icon within Kontakt to pull up Kontakt’s options menu.

From here, you’ll want to click on the tab on the left-hand side that says ‘Engine’. 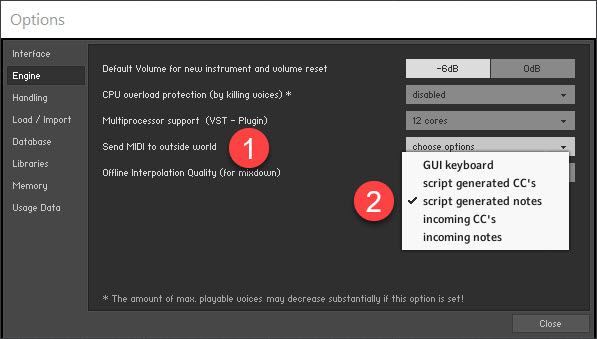 Next, you’ll want to click on the box next to the text that says, “Send MIDI to outside world”.

From here, you’ll want to check the option that says, ‘script generated notes.’ 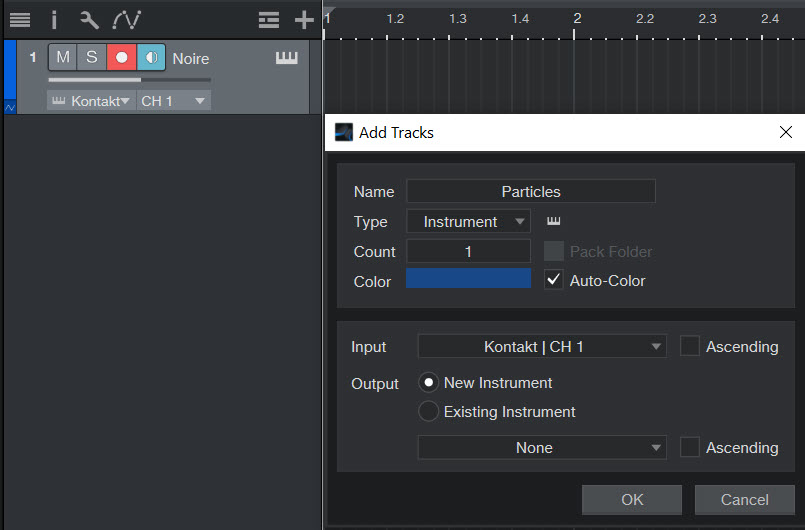 Next up, we want to create a new instrument track. For simplicity’s sake, I have called it ‘Particles’.

Here is the important part – in the input section, you’ll want to select Kontakt’s channel 1, or whatever channel your Noire instance is running on. If you see my Noire track, you’ll see that it is running Kontakt on channel 1, so you want this to match on your new track.

Now, when you play a note with Noire, it should play the note on both tracks. It will also play all the particles on both tracks, which we’ll fix in a moment.

Step Four: Load Up A New Instrument, And Prepare For Recording 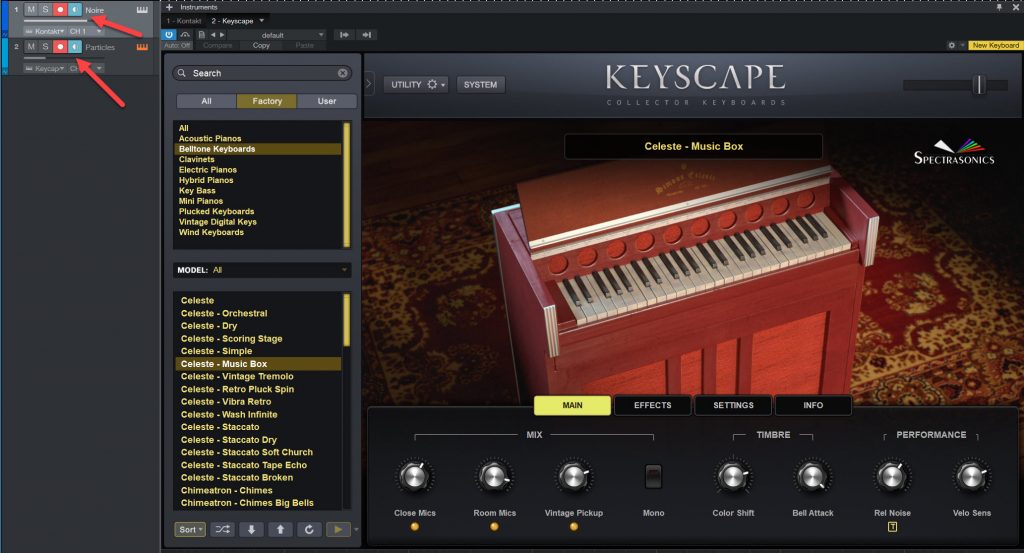 Load your instrument of choice onto the second track.

In this case, I chose the Celeste – Music Box from Spectrasonic’s Keyscape. In my opinion, bell type sounds sound really nice with the particles engine. They can give off both a whimsical, care-free feeling, or a really creepy feeling great for horror / suspense scores depending on the settings used.

Anyway, you’ll want to monitor both tracks to hear the playback of both Noire’s piano and the particles engine. 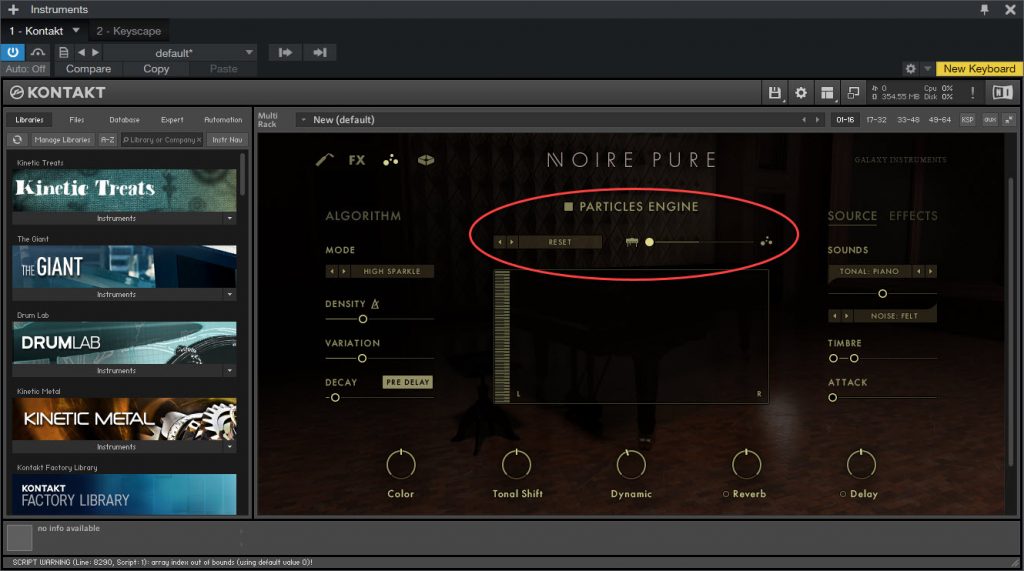 If you don’t want Noire to also output its own particle noises, you can turn the balance of piano / particles all the way over to the left. This will still output particles at their full volume on the second track, but will disable Noire’s particle sounds completely.

After finding your ideal settings, congratulations! The particles engine is now fully set up to use with a second instrument. However, there is one optional step worth considering.

Step Six (Optional): Fit Particle Notes To The Key Of Your Song 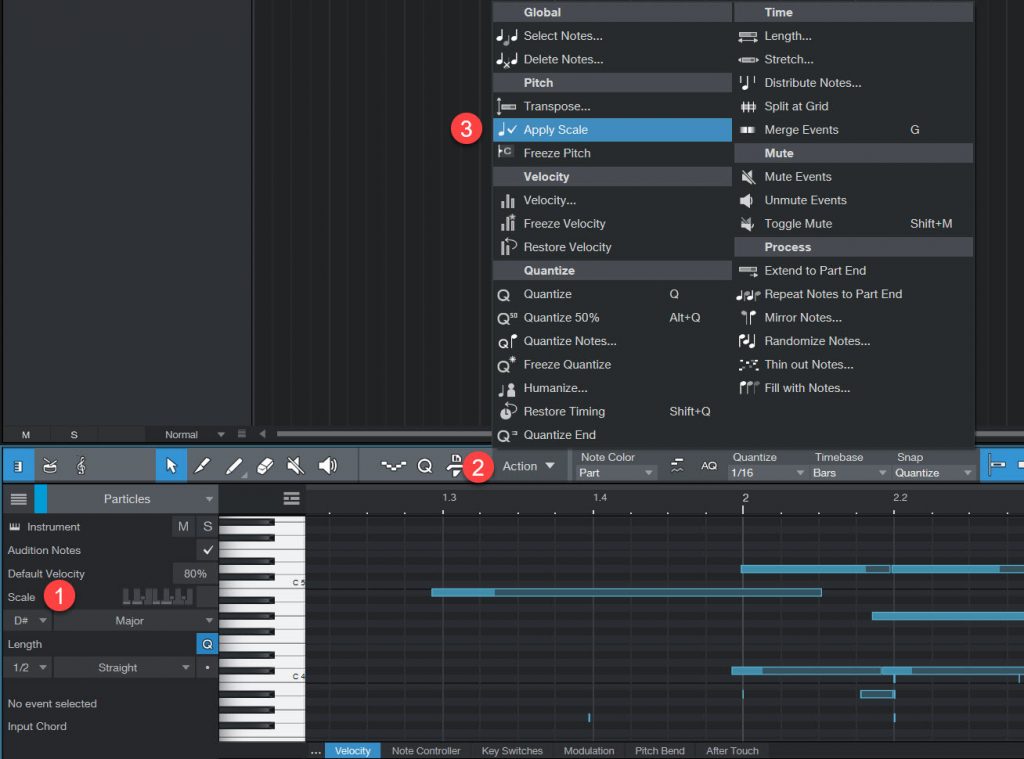 Finally, you may wish to change the notes that the particles engine generates to fit the key of your song. This can make the output a little bit more pleasant, and less random.

In Studio One, this is done by highlighting the notes on the piano roll, selecting the scale, clicking action, and then clicking ‘apply scale.’ This will move all notes to the nearest note on the scale that you chose.

Use Cases And Recommendations

Note that due to the volume of notes played, it can take some tweaking within Noire’s particle engine to get the sound you’re looking for. I recommend a fast decay of the particles and starting low with the density of the notes, or it can quickly become overbearing.

If you don’t want to use Noire at all in your piece, you can also create a third track, and turning the volume down close to zero (without muting it completely, as this will disable the MIDI out).

Some of my favorite ways to use the particles engine include:

As mentioned earlier, these can give off a really pleasant, happy feeling, as if everything were right in the world. They pair great with Noire if you’re going to use is as the main instrument in your arrangement.

Using the particles engine with a brass synth can give off a really trippy experience, which can be useful when creating psychedelic music.

It brought me to a very interesting headspace when combining the brass synths with a droning ambient pad. I could definitely see this being used creatively for some mind-bending songs.

Getting the particles engine to sound good with other instruments can be difficult, as the notes do not always harmonize well.

However, this makes it quite useful for unsettling music right out of the box.

I hope that this article has been helpful for you, and you’ve managed to get the particles engine working with other virtual instruments.

I would love to hear how you’re using this creatively for your arrangements. If you have any music recorded that you’d like to share, feel free to link to it down in the comments and let me know. I’d love to update this article with examples and other suggestions for musicians to try out.

Finally, we will be posting more virtual instrument tutorials on our YouTube channel soon, so please visit our channel by clicking here and consider subscribing!