What Separates Good Sample Libraries From Bad Ones?

It goes without saying, but sample libraries come in a wide range of quality, and judging the quality of a new sample library isn’t always as easy as it sounds.

What separates a poor sample library from a great one? Why are some companies able to charge over a thousand dollars for a single library, when many DAWs come with the very same instruments built-in?

If you’re new to virtual instruments or you don’t yet know what you’re missing with more expensive libraries, we’ve put together this article to help explain.

These factors can also be used to help you accurately judge the value of each sample library you’re thinking about purchasing.

Let’s get into them!

Starting with the most obvious, we must ensure that the samples provided are professionally recorded.

Sample libraries are built by actually recording a real instrument being played. It doesn’t matter how expensive or beautiful the source instrument is, if it sounds like it was recorded with a $20 microphone in someone’s garage.

Often times, your ears are the best judge, and even two instruments that were sampled in a similar manner may sound different (but not necessarily better) due to equipment used, or treatment of the room that the instrument was sampled in.

It turns out, that sampling is not as simple as just recording an instrument – there’s a lot of skill and technique that goes into high quality samples.

However, it should be noted that product demos on manufacturer pages are not always the greatest way to judge sample quality. While these demos show what’s possible with a given library, the demos are often specifically designed to highlight the instruments in the best possible light. This may include further processing of the sound, utilizing plugins and equipment that may not be accessible to the average buyer.

Even companies that utilize user-generated samples cherry pick the best ones for use on their sales page. This obviously makes sense from a business standpoint, but it can be a little misleading if you’re on the purchasing side of things.

However, I choose to look at this as a  good thing – because chances are, there’s a lot more you can get out of the libraries that you already have! 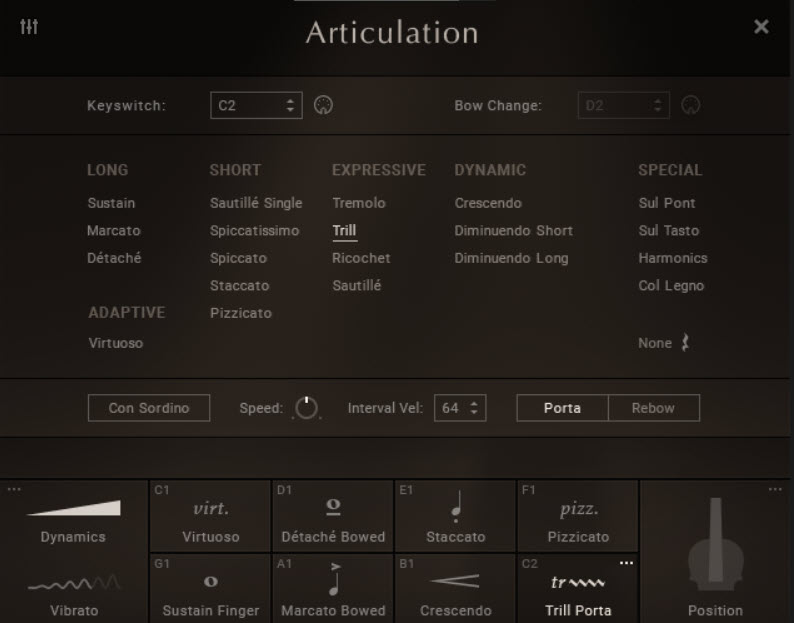 While this one isn’t really applicable to all instruments, it’s a necessity for orchestral composition.

Nothing is worse than needing a specific articulation for a song, and not having it available to you. In most cases, there is simply nothing you can do except write around it – you can’t really fake an articulation that wasn’t sampled, and switching to a different library just for that one missing articulation will often sound unnatural, due to different instruments and recording environments.

The violin for example has more than 15 different articulations, from plucks to long sustains, and you will likely use multiple throughout each composition.

Adjusting your piece because articulations aren’t available prevents it from being the best it can possibly be, and causes the music to sound less authentic and natural in the process.

The best sample libraries are practically indistinguishable from skilled human musicians. A wide variety of articulations are a large part of that.

Speaking of authenticity, round robins are a large part of making virtual instruments sound real.

A round robin is essentially sampling an instrument in the exact same manner an additional time, leading to a very slightly different recording. When the virtual instrument is played, the software will switch between different round robins to avoid playing the same sample twice.

The best sample libraries will have multiple round robins for each note and velocity level. The problem with cheaper libraries is that creating 4 round robins for example, leads to 4 times as many samples being necessary to complete the library. This is time-intensive and drastically inflates the download size of the samples.

Still, round robins are important to making the instrument sound realistic particularly on some instruments, such as drums. Therefore, this tradeoff is certainly worth it!

When you play an acoustic instrument, there are a seemingly infinite level of dynamics that you’re able to play.

With virtual instruments, are are bound by the limitations of MIDI, which has 128 different values for velocity. This means that even if manufacturers chose to record that many, they are limited with the number of dynamic levels that they can sample.

Of course, this often isn’t necessary.

Still, the more velocity layers that have been sampled, the more authentic the instrument will sound. This is because the tone and timbre changes as the instrument is played at different dynamic levels – it is not simply a manner of taking a sample, and making it louder or softer.

Additionally, more velocity layers enhances the playability of the VI. It feels more expressive, responsive to your touch, and ‘alive’.

If you were to take a cheaper piano library that has for example, 8 velocity layers, and then compare it with something like Native Instruments’ Noire (that has 22 velocity layers), the difference in expression is immediately noticeable.

Again, this factor is more important on some instruments then others, but a higher number of velocity layers equates to a better library. Though like round robins, each additional velocity layer increases the number of samples needed, and the size of the overall library.

This is a personal opinion, but when comes time to actually produce a track, I’d rather have a library that does one thing really well, then a library that does a bunch of things in a mediocre matter. Though admittedly, I may be a bit biased because I’m fortunate to have a lot of tools available to me.

Still, sometimes the sound you’re looking for isn’t quite right, and being able to make small adjustments to it can really do a lot for your composition. Additionally, it also helps the music feel more unique – like your own signature sound, rather than being forced to play just like everyone else who has that same library.

Funny story – I listen to a lot of piano music on Spotify and every so often I can pick exactly what virtual piano they’re using for their production, sometimes down to the exact preset. Of course, the average listener would never put this together, but having spent so much time playing the same piano myself, you learn to recognize them.

The ability to tweak or finetune your sound is always an added bonus, even if is something as simple as blending multiple microphones together.

Note that options that provide additional alternative samples are valued much more highly than simple effects built-in to the VST. While being able to adjust things like EQ or reverb within the VST itself is nice and convenient, many people will already have dedicated effects plugins that will do a better job.

When you load up the library, how easy is it to simply pick up and play?

There is often a balance that needs to be struck between having a library that’s complex enough to use for serious arrangements, but simple enough to play without needing to do a lot of programming. The inclusion of keyswitches, a large number of velocity layers, and intelligent use of something like the mod wheel can aid with this, and cut down on time spent tweaking notes later.

This is often one case for purchasing multiple libraries of the same instrument – I have some that I use for sketching or playing live, and others that I use for production tracks, where I’m willing to take the time to tweak individual notes.

The fact of the matter is, the more difficult something is to use, the less inclined we are to pick it up and actually use it. Humans are inherently lazy and instead of feeling bad about it, we should keep it in mind and take it into account when making purchasing decisions. Yes, a certain sample library may sound amazing, but if it takes a ton of work to get that level of sound, it may not be something we turn to as frequently as we expected when we purchased it.

Finally, I consider it to be a huge bonus when a sample library includes something unique, that other sample libraries leave out.

As time goes on, you’ll collect more libraries than you know what to do with – often with instruments overlapping. Most composers have their ‘go-to’ instruments, and settle down on using a much smaller number of libraries than they actually have.

Even if another library sounds slightly different, it may rarely get used.

When you can find a sample library that offers something truly unique that can’t be replicated in other libraries that you own, you give yourself another useful tool that actually has practical application.

This is why a good rule of thumb when purchasing libraries is to wait until you’re actually working on something and don’t have the tool needed to complete the job – then seek that out specifically.

Otherwise, it’s far too easy to collect library after library of virtual instruments that all cover exactly the same ground.

Like many composers, I have a bad habit of collecting large amounts of sample libraries, to the point where it becomes quite overwhelming.

The 7 factors mentioned within this article should be taken into account when purchasing a new library. Of course, let your ears be the judge, and take the time to demo products when demos are available.

Ultimately, you are the only person that can decide if a sample library is right for you.