These Are The 10 Chords A New Guitarist Should Learn First

Did you know that many of the songs you know and love, are only made up of 3 or 4 chords?

Better yet, did you know that if you learned just 10 chords, you could play and sing along with the vast majority of classic songs out there?

As a matter of fact, this is part of the reason why guitar becomes so addictive. While it is certainly a difficult instrument to master, it doesn’t take very long to begin making some very enjoyable music, and having a lot of fun in the process.

In this article, we’re going to look over the 10 chords every guitar player should learn first. These chords will build the foundation of everything else, and once you’ve mastered these 10 chords, you’re well on your way to becoming an even better guitar player.

Note – if you don’t know how to read chord charts yet, I highly recommend watching this video that explains it further:

Let’s get into it! 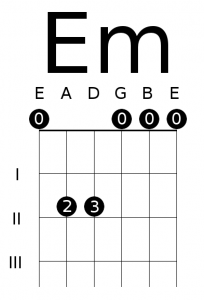 E minor is a chord that’s less common than some of the others mentioned here, but I often recommend new guitarists start with this chord first.

The reason for that is simple – it is one of the easier chords to play, and also utilizes all of the strings. This chord will give you practice moving your pick through each of the strings, which is important to get down before moving onto other chords.

And although you’ll want to move your pick swiftly through all of the notes, it’s also important to slow down and make sure each and every note is really resonating. It is easy to accidentally mute strings with your finger, so playing through each note individually allows you to recognize when this is happening. 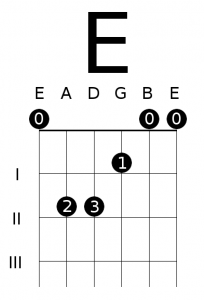 The next chord is E Major.

As you can see from the chord chart, this note is almost exactly the same as E minor – the only difference is you now place your index finger down, onto the first fret of the G string. This changes the chord from major to minor. 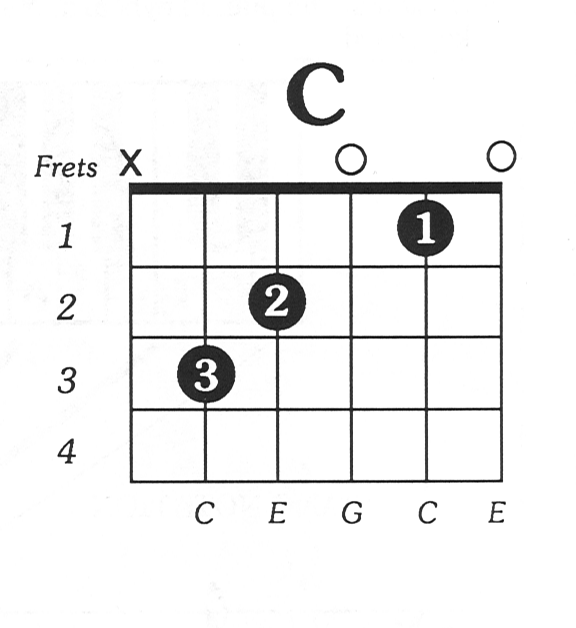 C major is one of the most common chords of all time. This is likely because C is the most popular key in music.

The shape of this one is a bit different, and you have to shape your fingers kind of like a staircase. One thing to watch out for is your first finger muting the high e string. Arch your fingers so they aren’t muting any strings, and play through them individually to make sure. If you’re still struggling, ensure you’re only using the tip of your finger to push down the string. 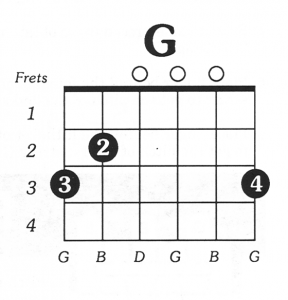 G major can be a difficult chord for new beginners to switch to, because it has its own very unique shape that isn’t much like other chords. It’s almost like making a claw or hook type shape with your fingers.

Note that while the chord chart states to use your ring finger for the high e string, you can also use your pinky finger if you wish. In fact, some guitar players prefer to also push down on the third fret of the B string using their ring finger to make the chord sound slightly different. Regardless of what option you go with, G Major is a very important chord to learn as it is one of the most popular. 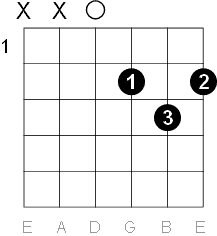 Once you’ve learned all of the chords up to this point, congratulations! You can now play tens of thousands of different songs, including some hits like:

…and many, many others!

One key to remembering the D chord is to think of it like an upside-down triangle. 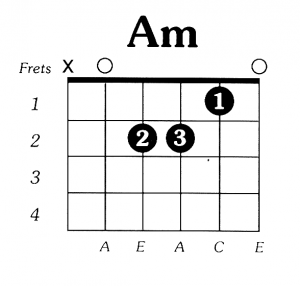 Do you remember the E Major chord from earlier?

The A minor chord has the exact same shape, only moved up one string higher (also, you don’t strum the low E!)

Of the songs that use minor chords, E minor and A minor are the most common, so mastering both of these can add that minor touch that stands out in so many tunes.

This chord is a convenient one to learn, as all of the fingered notes are on the 2nd fret.

While the chord chart here recommends you use a separate finger for each string, it’s also fine to hold all of them down with one finger as well. However, if you do this, you won’t want to play the high E string. 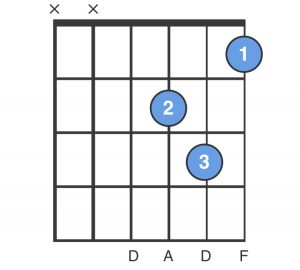 Although the shape looks kind of similar to the D major chord, it’s played a bit differently. This is because the first finger has to be able to hit the first fret of the E string, forcing you to play the other notes on different fingers as well.

Like the D major chord, the 5th and 6th strings are not played.

This one is very tricky, and it can take some time to get this one right. So, don’t get discouraged if you can’t get all the notes to resonate properly – it is definitely the most difficult chord on this list!

This is because it is the first bar chord – a chord requiring you to use the same finger to press down multiple strings. Lay your first finger down and press into all of them – you want the low E, the B, and the high E strings all to resonate with your first finger on the first fret. Again, this can be difficult to pull off and can even hurt your fingers a bit if you’re just starting out, so don’t feel bad if you don’t get it right away.

Once you do get it down, try switching between playing the F chord and the C chord, as they both keep the 3rd finger in the same position.

Finally, we have B Minor, which is kind of similar to F major in shape. This one is also a bar chord, making a little bit more difficult to play.

However, it’s certainly worth it, as this shape shape can be moved up and down the neck of the guitar to play other minor chords as well! For example, if you move the shape up one fret, you have the C minor chord. If you move it up another fret, you have C# minor, etc.

Therefore, it’s a very useful shape to master and you’ll use it more and more as you advance your guitar skills further.

Extra Tips To Keep In Mind

I remember how frustrating it was to learn your first chords, so I wanted to share some tips to keep in mind if you’re having trouble.

Once you’ve mastered these 10 chords, you’re well on your way to playing many of the songs you already know and love.

I hope that this article has given you some ideas on where to start. If you have any questions, please don’t hesitate to ask via the comment form below.

Finally, if you need some inspiration to get started, check out this video below – and try to count how many songs within it all use the same four chords!