The Boss TU-3 is one of the most popular tuning pedals in existence, and for good reason.

Tuner pedals are essential, and one of the first pedals that most guitarists should buy – especially if they ever intend to perform on a stage. However, with a number of different tuners available on the market, it can be difficult to decide which one is actually best for you.

In this article, we’re going to go over the BOSS TU-3 Chromatic Tuner Stompbox in detail, to help you determine whether or not this pedal is right for you.

So without any further ado, here is our review for the BOSS TU-3 tuner.

First things first, I would just like to give you a bit of perspective.

The TU-3 has been considered an industry standard for a while now, just like the TU-2 (Boss’ earlier model of this pedal) was before that. It is used by professional guitarists and bassists across just about every genre. Some notable musicians that use the BOSS TU-3 include:

…And many, many others.

This pedal doesn’t discriminate by genre or guitar. And as mentioned, it’s perfectly suitable for bass guitar as well (more on that later.)

Why Use A Tuner Pedal Instead Of A Clip-On?

When we work with students, most people start out with a clip-on tuner that clips onto the headstock of your guitar. Or even worse, they try to tune using a smartphone application.

Clip-on tuners are fine, but they offer a number of drawbacks.

Usually they’re much slower to use, aren’t as accurate, and are difficult to see in the sun (or under bright stage lights.) Just about every stage performer uses a pedal and even those that only play in their home tend to prefer pedals due to the convenience and accuracy.

So, it really is worth investing in a more expensive pedal if you’re going to play guitar for the long-term – and a tuner is usually one that we recommend first.

Features, Performance, And Use Cases 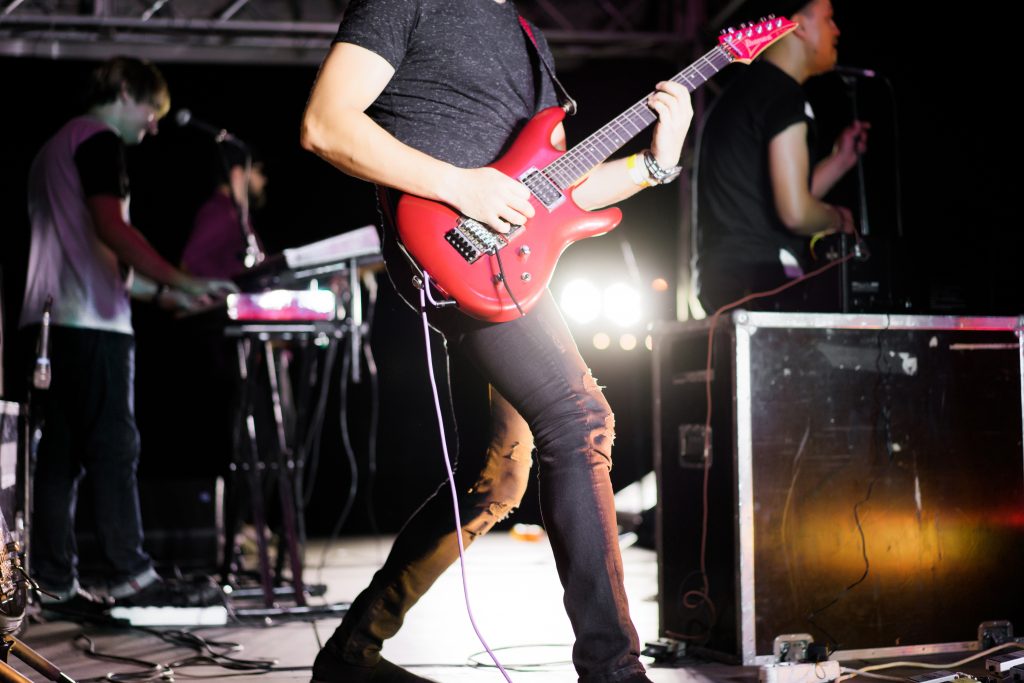 Now that we’ve got that out of the way, let’s cover the unique features of the Boss TU-3 and why you might want to use it. Considering it’s a tuner (which let’s be honest, isn’t all that exciting) there are still a lot of neat features that you’re sure to appreciate!

As mentioned earlier, the TU-3 has built-in support for both guitar and for bass.

However, it also supports 7-string guitars, and 5 or 6-string basses accurately. Musicians are able to quickly cycle through modes to get to what they want.

Additionally, the TU-3 also has a chromatic mode, allowing you to tune to any note you like.

Tuning Down? No Problem

If you look at the TU-3 stompbox head-on, you’ll notice numbers ranging from 2 to 6 next to the flat symbol.

This is used to tune down between 1-6 semitones, which is especially convenient for rock or metal guitarists that often deviate away from standard tuning.

The entire point of a tuner is well, to help you tune your instrument! The TU-3 is incredibly accurate up to +/- 1 cent.

Some purists would argue that even 1 cent is not as accurate as it could be, but really this difference is so insignificant that it’s hardly worth talking about. Even changes in temperature or humidity can slightly affect the guitar’s tuning, so you’re never going to maintain a 100% perfect tune regardless of what tuner you end up going with.

The pedal has a 21-segment LED meter making it easy to see how sharp or flat you are. Additionally, there are two ways to view whether or not you’re in tune – using the standard cent mode (flashing the light some degree to the left to indicate that you’re flat, and to the right to indicate that you’re sharp.) Alternatively, the lights can spin left / right, with them slowing down as you get closer to becoming in-tune.

This one is particularly useful if you’re playing on-stage, or in an environment where you otherwise wouldn’t want people to hear you tuning.

Alternatively, you can plug into both of them if you need to split your signal.

If you’re struggling to see the lights on the tuner, you can adjust the brightness very quickly. This makes the Boss TU-3 pedal particularly useful if you’re going to be playing outdoors in the sun, or if you’re playing in a venue with lots of stage lighting.

The buffer on the TU-3 is great, and having this tuner on your pedalboard shouldn’t affect the sound or tone in any major way. A good buffer is important if you intend to use a lot of pedals.

The Boss TU-3 Chromatic Tuner Pedal runs off of a 9-v0lt battery, or you can plug it in directly to a power source.

Additionally, you can pass power to up to 7 other BOSS / 9v pedals off of it as well.

BOSS pedals in general have an incredible reputation for durability. In a world where it seems like most things are made to break, BOSS pedals are an exception.

As a matter of fact, professional musicians often prefer Boss pedals for this very reason. Plus, even if one were to break, they know that they could get one and immediately recreate their sound straight away.

So hey, feel free to just chuck it at anybody that heckles you during your show.

Still, this thing will last you a lifetime and even after years and years of use, the only thing that you’ll probably notice is some paint breaking off (if you’re rough with it.)

Honestly, I’m torn on this one. The TU-3 is indeed an upgrade over the TU-2, but whether or not it’s worth paying for is a personal decision.

Both tuners are chromatic and can support both guitar + bass. Both are incredibly durable and will likely work for as long as you need them to.

The TU-3 has updated electronics and is a bit more accurate, with accuracy up to +/- 1 cent whereas the TU-2 is accurate up to +/- 3 cents. Is this enough to make a difference? Maybe to you if you were playing a lot of chords. The untrained ear (i.e most of your audience) won’t ever hear it.

Finally, the TU-3 is brighter and is therefore much easier to see in areas with a lot of light or glare.

My conclusion: If you already have the TU-2 and you’re not performing, you can probably stick with what you have. If you’re a performer or you don’t already have a tuning pedal, consider purchasing the Boss TU-3.

It’s hard to write an exciting review about a tuner, but I hope you found our review for the BOSS TU-3 stompbox helpful.

We truly consider it to be a wonderful pedal that just about any guitarist or bassist can benefit from. Considering its accuracy and convenience of use, there are few better options available on the market right now, and it’s why it’s been one of our most recommended tuning pedals period.

If there are any questions that we can answer for you about this pedal, please do not hesitate to ask us using the comment form below.

Thank you for reading, and enjoy!